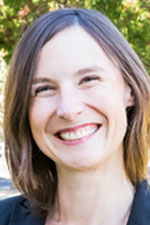 The unprecedented labor-faith-community alliance is working to build a new economic model that rebuilds the middle class, to raise wages and workplace standards for all workers in this valley, and to address a regional housing crisis that is pushing families and children to live in garages, cars, or near creek beds in order to survive. Silicon Valley Rising members have moved Apple, Google, and a half dozen other companies to increase standards and support contract worker organizing and policy campaigns to increase funding for affordable housing and protections for renters are moving across the Valley.

Derecka also led Working Partnerships USA to launch a strategic plan for 2015-2018 including:

As Working Partnerships USA’s organizing director from 2008 to 2013, she was instrumental in developing organizing and campaign strategies to win policies improving the lives of workers and their families, including the 2012 minimum wage increase in the City of San Jose. She led the organization’s non-partisan civic engagement programs building an organized base of more than 40,000 low-income communities of color in Silicon Valley, registering more than 14,000 voters and working to increase civic participation rates of voters of color and low-income voters in Santa Clara County.

Mehrens is the daughter of a union construction worker and a union community college teacher and is married with two young
children. She graduated from the University of Oregon with a bachelor’s degree in Sociology, History and International Studies.